I’m backstage at the Highbury Garage in Islington with Dan (fiddle), John (Bass) and the other John (guitars, banjo, mandolin, tin whistle & comedy dancing). Front man Ken strolls in and when I enquire if his trademark Mohican is lurking beneath his flat cap, he whips it off to reveal that he has gone full slap-head while sheepishly admitting that his thinning mane had pretty much made a change of appearance inevitable. I have to say it suits him though I am concerned that his reflective bonce is going to confuse the light meter when I get the camera out.

I kick off with a topical question as Ken is uniquely placed to answer it. As a teenage striking miner in 1985 he witnessed the infamous Battle of Orgeave. This week the government has flatly refused to hold a public enquiry into the events of that day. I ask if this surprises him?

“No not at all. There might still be somebody, like police chiefs for example, who can be prosecuted for what they did. I think what you’ll probably find is that when everyone who could be in trouble has died, then they’ll allow an enquiry because nobody can be brought to justice. So they’ll just keep knocking it back. Because they know deep down there was an injustice done. So they’re not going to grant one.”

“An enquiry will prove that it was all orchestrated. Previously pickets were turned around threated with arrest. But that day for the first time they we saying ‘yes no problem, in you come. Park your car there & your buses down there & meet over there.’ For the first time the police were so nice, they weren’t stopping you on the motorway. They were telling you where to go because they had an agenda and they were told what to do. To absolutely smash the miners that day.”

“People who were just turning up in trainers, shorts and a vest. It was a red-hot scorching day and people were running for their lives. They don’t want anyone prosecuted for the atrocities the police committed that day. With the snatch squads and when they opened up and charged with the horses. They were told to go in hard and destroy us. Too much stuff will come out if there is a public enquiry. How the government sanctioned an attack on innocent people.” 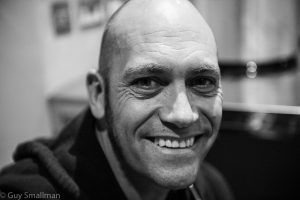 The band are presently on a bit of a high after two storming shows in Swindon & Norwich, so moving onto a more upbeat subject I ask what we can expect from the forthcoming album ‘Fake News & Propaganda’?

“I think it’s very different this one. It’s the first time in Ferocious Dog history that we’ve had the same line up for two albums in a row. It has a slightly different feel. It’s a bit rockier in places. People who’ve heard it describe it as a more ‘grown up album’. We’d just released the Red Album (2017) then Dan dropped the bombshell that we’d be heading straight back into the studio to do this one. But we had no completed songs. So we went in and jammed music, like we would at the sounds checks etc. Then as the songs formed we stuck lyrics to them. So it was a completely different process to the others.”

“We’re opening with a new one ‘Cry of the Celts’. ‘Traitor’s Gate’ is another favourite. We’ve also got a couple of co-written ones on this album. Jeremy Cunningham from The Levellers collaborated with us on ‘The landscape artist’. Also Nick Burbridge wrote a song for us. A song, which is also about us in a way. Five verses of lyrics about themes, which have been important to us over the years; hunt sabbing, drug abuse, the miner’s strike, PTSD & homelessness. He’s such a good song writer and we’re proud to have him on the record”

Delving deeper into the politics of the new record Ken & co explain its title and what inspired it:

“It’s about disinformation. It’s about the media & people not knowing what is real and what isn’t. The Russians were the first ones to really major this through Putin & his media machine. It’s also about being desensitized. If you see a little child washed up on the beach dead you go: ‘oh that’s horrible’. No really you should be crying out ‘this is wrong!’ but you get used to it because you see the images non stop.”

“You see the fake news as well with stuff like Brexit. How the NHS was going to benefit written on the side of a bus? Where’s that bus now? It was all rubbish coming from the empire of Rupert Murdoch. There is one song on the new album that has a proper dig at him.”

“You get told on TV and by the papers that Jeremy Corbyn is a KGB agent that works for the Czech secret service. People think: ‘it must be true because they said it on the news, why would they lie’? They lie because they’ve got an agenda to smear this man. We’ve met him, one of the nicest blokes you could ever meet. He makes time for everyone. The man who has done nothing wrong, other than sticking to his principles. They’re smearing him, because he is a threat to them, he’s a threat to their way of life. People can see now, that he is a threat to capitalism. The rulers have got too much to lose, same as the Blairites that are still in the Labour party. They’re doing their best to derail socialism and Jeremy Corbyn because they have too much to lose as well. Look at the people in the city who they rub shoulders with. You don’t have to go to university and do a degree to work this out, you can see it if you want to.” 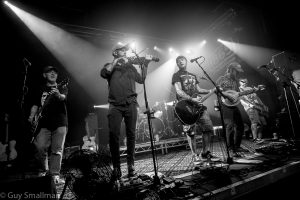 As always the band are hosting stalls on the tour for causes they hold dear and continuing the ritual of encouraging fans to clear out their kitchen cupboards for donations to the local food bank.

“The Sea Shepherds who we met when touring with the Levellers are here every night with us on these dates. Also today the food drop will be for the Islington Food bank. I hate organizing this because we shouldn’t have to. But sadly we need it. We shouldn’t have food banks at all. People should be doing ok in a country like this, in this day & age. But they’re not and it’s getting worse. Worse through austerity.”

On that cheery note the band departs to do their sound check now the backline is in place. The album Fake News & Propaganda will be released imminently and can be ordered here. Meanwhile the band will continue to tour & play festival dates over the summer. Details & tickets here.