What the last few years have taken away in terms of human progress, they have certainly given back in terms of hardcore punk in the UK. When we look back on this period from the advanced stages of whatever future boring dystopia we find ourselves trapped in, I’m sure collectively we’ll agree it was somewhat of a golden era. I for one plan on enjoying it while it happens. One of the most productive bands since the beginnings of the pandemic has been The Chisel, with three EPs already under their weathered belts they can now add eagerly anticipated debut album Retaliation to the list. Released on an independent label with excellent genre pedigree, La Vida Es Un Mus, and produced by scene stalwart Jonah Falco of Canadian-UK hardcore band Fucked Up, it is a debut with that winning formula of raw urgency combined with experience and technical skill.

Featuring singer Cal, guitarists Luke and Chubby Charles, Ellis on bass and Nick on drums, they have been drawing attention and praise as the year draws to a close and they pull out a cracking record to garnish plenty of people’s annual lists. The Chisel play so fast and so hard it’s a physical experience just listening at home, and the state of my ears leaves me wondering about the state of their hands at the end of recording. My concerns for their wellbeing aside, the range on this record is immediately striking. Not just another assault of noise, the lyrical and musical complexity of the album belies talent forged in some of the most genre-defining bands of the last ten years such as Arms Race and Violent Reaction along with a clear investment in the scene they represent. 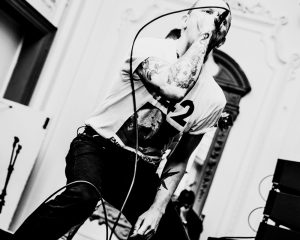 Opening with the storming Unlawful Execution the pace is set for the next twenty eight minutes as Cal rails against police brutality and the kind of extrajudicial killings that have set London aflame over the years. Being from Tottenham myself, growing up in the shadows of the worst excesses and neglects of the state had no small impact on my worldview. As a Lion, we will never forget Ian Tomlinson nor will we forgive the politicians like Kier Starmer who tried to deny his family justice. “Undercover in our pubs, now there’s nowhere left to hide” is something that has crossed the minds of many, from protesters spending years boring the shit out of Special Branch to football fans or union activists with one eye on the unfamiliar face at the bar.

Next up is title track Retaliation, with its catchy and poignant chorus in praise of giving as good as you get- “pay ‘em back in kind.” There is something deliciously pub rock in the tuneful and harmonious delivery that will no doubt have crowds gleefully singing along while they launch disposable pint cups clean into the air to come crashing down on the already glistening skinheads and feather cuts in the crowd.

Come See Me deals with one of my favourite subjects- basement dwellers. Calling out subterranean “xenophobic cunts” the likes of which have rampantly overpopulated the internet, like spores in a petri dish, in recent memory. The song gently encourages said shit talkers to come see them in real life rather than making idle threats from behind a screen. 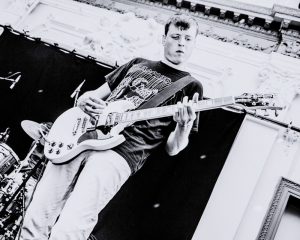 Standout track Not The Only One comes midway through the album, and like Retaliation before it its primary focus is class pride carried by rhythmic drumming and driving guitar that is elevated to anthemic proportions by the emotional delivery of singer Cal. The song references the 1831 Merthyr Risings, where the working class population of the Welsh town and surrounding areas rebelled against landowners and the state- at one point seizing control of the town after the retreat of soldiers following a deadly clash. They raised the red flag, its crimson hue symbolising the blood shed by the workers, and it quickly spread across the world as a symbol of working class resistance, sacrifice and, most importantly, power. The album cover for Retaliation, by Tara Atefi, features prominently the red flag flying against the breaking clouds to reveal a blue sky. Amongst the smoke and fire, new days must dawn.

A personal highlight on the album for me is What Was Mine. While the band stays true to their Oi! and street punk sensibilities they are neither afraid nor out of their depth when they branch out into the realms of melody and reverb. It’s a wistful song about looking back on the certainty of youth with eyes that have seen the world for all its fleeting and unfulfilled promises.

Closer Will I Ever See You Again is a bittersweet song about loss centred around an elegiac harmonica, and is sung by guitarist Chubby Charles- himself of the excellent Chubby & the Gang whose second album The Mutt’s Nuts was another standout record of 2021. 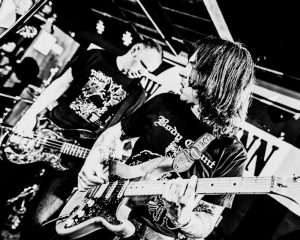 One of the benefits of drawing members from around the UK is the influences different cities music scenes have on the sound. As well as being from various inner and outer London locales such as Acton and Croydon, plus classic commuter town Guildford with its thriving live music scene, their singer hails from Blackpool, commonly referred to as the Paris of post-Brexit northern Europe and a place I know far too well. It has the honour of hosting the annual Rebellion festival and its attendant mashed potato stand (I learnt to bring my own vegetarian gravy in a thermos.)

Rebellion is an important festival in the UK roster as it champions and collates the best live acts from across the vast and fluid punk genre. Retaliation is borne of a rich heritage, one that spawned a hundred subcultures and still has something to offer new generations of musicians and fans. It flies not just the red flag of the Merthyr rebels, but the black flag of real punk music made to be played live and utterly, unapologetically loud. It’s become increasingly fashionable in cultural/socio-political spheres of incestuous, feedback-generated influence to totally reject anything perceived as belonging to recreational machismo. The realities of life at the sharp end of the class spectrum, caning it with “the lads” (good auld lads, though the liberal imagination rarely includes women who could enjoy such things), rowdy live shows, kicking off etc. are routinely rejected and critiqued as somehow belonging to a different, less enlightened era.

The fact is grassroots music is becoming increasingly class-sanitised and gentrified; thanks often to extortionate venue rents, corrupt local councils craven to property developers, and the marginal financial gains to be made for those either not bankrolled or still needing to actually work to make a living. This inevitably impacts the scenes allowed to exist, for fans of real punk it has frequently meant being relegated to a few friendly venues (often, tragically, in south London.) What is great about bands like The Chisel, and others across the genres they straddle, is the unapologetic representation of a lifestyle so traditionally associated with working class men- pubs, football, mates, a healthy distrust of authority that comes from real life rather than reading the Guardian. Interspersed with bonding, love, loss and genuine class pride- these are the stories being lost to the mainstream of middle class, performative soft-boyism that tries to dictate what is or isn’t valid. Importantly, these are also real lifestyles being lost to the destructive, consumptive capitalism that has eaten our cities, communities and industries alive over the last few decades. They are to be treasured, to be enjoyed, lest they be lost forever. 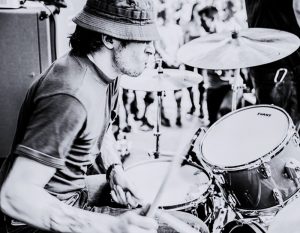 Retaliation is an album that for all its nose bleeding speed and noise maintains a remarkable complexity in its twenty eight minutes. Elevating every catastrophic assault of punk rock rage, it is continually punctuated with moments of euphoric pub rock brilliance through which you can almost hear the collective chorus of a basement crowd in some heaving venue. It’s brilliant to see bands like The Chisel breaking down the barriers to wider recognition with such great material. While graft plays a huge role in commercial success, none of it is possible without delivering the goods musically and that’s what they have done consistently since their formation two years ago. Retaliation is all the more impressive given its development without the capacity to tour properly, often so vital to the progression of bands in this genre. Due to the ongoing [insert numerical value at time of publication] wave of Covid, their January tour has been postponed until early Spring. This is the responsible option, given the intense proximity and exposure to the aerosols (and sweat, possibly blood, possibly tears) of others guaranteed by these shows. Neither to be missed nor to be taken for granted when the time comes.