The Kent lads certainly like a challenge. First headline show at this venue and they’ve decided to turbo charge their nerves by playing all of ‘My Bodybag Your Scene’. Which means a load of tunes getting their first airing. They needn’t worry. There’s a lovely crowd in and the clean sound in this place certainly benefits the precision of the band and the strobe-like speed of the vocals.

Opener ‘Bodybag’ is like an audio shop window that proudly displays the many tools in their box. Scott has a well tuned singing voice that swings from the ballad to the bawl, but most of all a pretty unique rapping style that combines a mish-mash of grime, hip hop and Oi. Jimbo and Jordon’s hard-edged, but controlled and melodious, axe work provides the tune atop Matt & Joe’s pounding rhythm section. They’re fucking good and this tune like so many of the others sports a banging and instantly memorable chorus.

After a quick dip into the back catalogue with the gloriously laddish and life-affirming ‘Jack of all trades’ it is back to the most recent record with ‘Kaboom’ and the place properly erupts as the band turn their critical eye on our excuse for a media. Anyone who disagrees with the sentiments of this song after the last general election needs their head looking at.

The melodious riffs of ‘Millwall Brick, Glasgow kiss’ examines love & loyalty on the margins before leading us into ‘Black white & grey’ another of the album’s high points. A song built around the simplest of lyrical ideas that blows the mind with wave after wave of catchy punk rock with an underlying message. 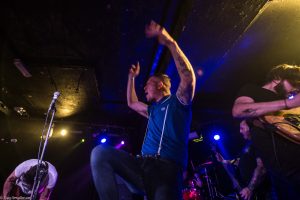 Less subtlety delivered is the narrative of ‘In the dark we dwell’. A tune that almost strays into the territory of soft rock. Before smashing you in the face with a gritty rap about the horrors of smack addiction. Some listeners will be lucky enough not to have been close to someone who has needlessly chucked their life away like this. Most of us experience a proper shudder at the familiar feelings of helplessness that this track explores in gut wrenching yet respectful detail.

‘Sex’ is yet another amalgamation of upbeat sing-along fun with a deadly serious message. Then we finally get to pause for breath with ‘For old times sake’ a reflective, lovingly crafted and sentimental trip up and down memory lane. It is perhaps the closest they get tonight to tender love song despite its overpowering glumness.

After briefly checking in with 2017’s ‘Blame Culture’ album in the form of ‘Molotov cocktails’, its straight back to the present and one of its most anthemic tracks in the form of ‘Accelerate’. It starts with a chant that appears to have captured and bottled the essence of a million rowdy terraces before powering into a crescendo of spiraling guitars that underlay Scott’s withering commentary on the absolute state of the music industry. 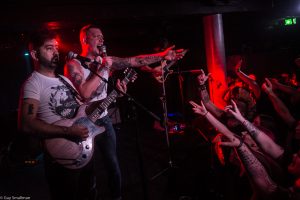 ‘Our time’ has yet another memorable hook line broken up by yet more of the front man’s furious rapping. His impressive diction would of course be thin gruel without some impressive lyrics, but he dishes those out by the ton. Lines like: “Coming down on you like six tons of bricks, like a brick shithouse, built out in the sticks.” plant themselves in your subconscious like they’ve always been there. Perfect in both their power and simplicity. As a wordsmith he is right up there with the likes of Kate Tempest. ‘Sell out’ is a melodious diatribe against gentrification and its appalling effect on the live music scene. Then we get ‘Cut your teeth’ a proper assault on the eardrums that is reminiscent of Faith No More at their most brutal.

Closing the proceedings with a medley, mainly from the back catalogue, we gratefully receive the joyous ‘Roots’, the newer statement of intent that is ‘DIY’ and the thoroughly uplifting and infinitely danceable ‘Banger’.

For those of us who miss the once regular and utterly incendiary shows of bands like SENSER and Rage Against the Machine; this lot could well have shown up just in time to fill that void.

Riskee and the Ridicule play Nambucca on February 27th