On July 24th reactionary Etonian Boris Johnson was selected to rule the UK by roughly 0.14% of the population and a coalition of leftists, LGBT groups and musicians responded in the best possible way. Prior to his coronation an event was posted on facebook with the following statement:

“Boris Johnson – a proudly racist, sexist, homophobic prick – will take hold of a Government defined by its violent cruelties to people of colour, migrants, women. A Government responsible for the hostile environment, for Windrush, for Grenfell, for 130,000 austerity deaths, will be led by a man who described Black people as “piccaninnies” with “watermelon smiles”, compared Muslim women to “bank-robbers” and “letterboxes” and referred to gay men as “tank-topped bumboys.”

An open top double decker bus was sourced for the protest and a PA along with a pretty reasonable sound system and a competent engineer with experience in mixing for protests. By the time the demo was making its way down to Westminster from Russell square up to eight thousand people had joined it. The chant that dominated the event was “Fuck the government, fuck Boris” a line immortalised by Stormzy’s now legendary set at this years Glastonbury Festival. Less than 10 extremely nervous cops accompanied the procession down to downing street with musical accompaniment being provided DJ Ashman & MC Big Ben.

At Whitehall there were live sets outside Downing street from the Female Allstars, AWATE, Peaky and Aruba Red. The gathering remained peaceful as the crowd danced and let of smoke grenades in front of lines of outnumbered riot police. This is just the opening shot against a government and ruling party that is the most hated in several generations. Welcome to hell Boris. It’s going to be a long hot summer… 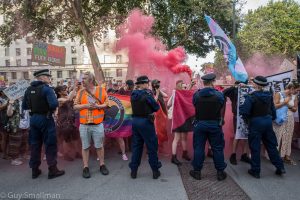