‘Cork’ kicks the album off with earthy vocals that study life, the passage of time and the peace that transition can bring. The upbeat acoustic riff nicely compliments the gentle pace of Riahannon’s poetic story telling for an opener that sets the tone for the rest of the album.

Which brings us to ‘Shells’, one of my personal favourites. A tale of hope with dreamy acoustic chords strummed underneath a narrative that jumps between the devastation of war and a memento from a long lost childhood.

The political and social ideas run throughout this record, boldly stated, but with the themes enjoying a balance between being gently studied and loudly roared.

‘Language’ is a buoyant affirmation of a world without borders or prejudice, that leaves you feeling almost upbeat about our chances in these dark and dangerous times. ‘Flesh’ is a beautiful celebration of gender and identity in its infinite rainbow of variety and experience. While also being a battle cry demanding tolerance and recognition for those who continue to be the most marginalized by fear and ignorance. 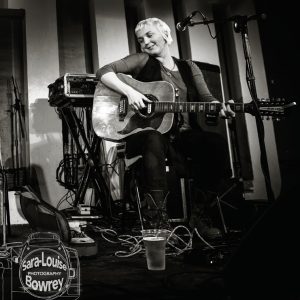 Moving away from the brash acoustic demands of the brazenly conscious bard. The fiddle gets some welcome prominence for some of the more understated numbers. ‘Ehwaz’ seems to drift in from distant hills with ancient rune-scratched crags channeling an age-old ballad into the ears of the listener. ‘Heritage’ has the feel of a traditional English folk ballad written in a simpler time when knowledge was passed through the generations by word of mouth around an open fire.

The rest of it swings between the singalong sounds of ‘Burn The Wagon Down’, and ‘Soundtrack’ (both of which have a cute, classic western feel) and the complete serenity of ‘Lowlands Away’ and the outro that is ‘Dodula’.

This record weaves a rich tapestry of sounds, sung from the heart and lovingly recorded alongside talented friends for what is a top collection of work. Snap it up on a Bandcamp Friday or better still from the Brewers Daughter in person at one those much missed gatherings in the months to come.