I don’t normally post stuff of such a personal nature but I feel I have to get this off my chest.
I am hugely proud of my circle of friends and find them very supportive in all manner of ways, but my dilemma lies with the fact that after “coming out” I chose to continue living my life according to who I was at the time. I didn’t drop everything and disappear into the gay world, exchanging all my straight friends for gay ones. I kept doing punk music and stayed with my amazing punk rock family. I think this is a familiar scenario with a lot of younger “out” people as LGBT acceptance has spread further afield, but I need to address the intrinsic difference and internal narrative that goes on when you choose this path.

Before you come out, you learn to have a very strong internal dialogue, this starts out as feeling worthless, disgusting, sick and most importantly – that being “you” is Illegal. The moment you come out it switches to empowerment, pride, fighting back and ownership… but the fighting back part and coming out part never ends! We are continually doing this, whether at a new job, a new gig in a different country, chatty people on a train or meeting people on holiday. It is quite obvious of course, when I roll up with my amazing husband who is very good at clearing the air straight away, but when i am on my own or with a group of straight friends I often tend to just blend in. Become invisible under this seemingly “straight cloaking device” dictated by my mannerisms and how i hold myself. I have never consciously tried to alter these mannerisms either way (neither more macho or camp) as I just always wanted to be myself. Conversely I don’t feel the need to say “Hi Im Kieran, I’m a homosexual” within the first 5 minutes of meeting someone. 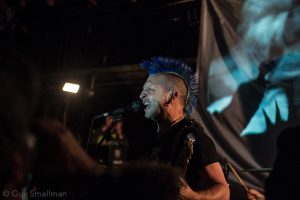 This thought process or internal dialogue is always there, often quite critical and cautious because of the close relationship built in your formative years as child (keeping this secret). If I am to hold my partners hand in public, a quick subconscious risk assessment is done, and the same if on public transport and getting off at different stops… do I kiss Collin on the lips leaving him on the bus, potentially “outing” him to all the other riders? Even in an amazing progressive city like London these precautions are always in place. Don’t get me wrong, I in no way walk around timid and scared, actually sometimes I want somebody to mutter something derogatory so I can get straight up in their face. It makes me feel empowerment and pride, even if they were to kick my ass they still wouldn’t be able to extinguish the feeling of pride.

The by-product of this internal dialogue has unfortunately given me a very short temper, from zero to boiling point in under half a second. It is something I am working on as it can be very counter productive, but I am writing all of this so my straight friends can understand that although I seem content and sane there is intrinsic differences between us.

Recently in Russia I was told (only by one person, mind you) that “people are laughing at you on stage when you talk against homophobia” to which I replied that I don’t care. I chose not to react but to have a calm discussion with this guy as I felt I can make more progress (hopefully) influencing him as a positive role model rather than storming out and creating a scene. He likes our band but would probably like us better if all the gay stuff was taken out. It was a very painful, long conversation and left me feeling quite damaged inside. At the same time I felt is was my duty, almost like doing some kind of outreach. I was very aware of the tangible homophobia on the streets there, which suddenly makes one’s invisibility very convenient. Homophobia IS the cultural norm in Russia, signed and sealed with government approval. It is called brainwashing. If you are not actively fighting against it you will be unknowingly complicit, almost like catching a virus. Although I had an amazing time over there it awoke something inside of me that has been dormant for quite sometime.

Back in London I now feel a kind of separation, a division or difference, which I hadn’t noticed before. I recently got tied up in an online debate as to whether being proud of gender or sexuality was “stupid” in the same way as racial pride. It is pretty safe to say I went from zero to boiling point pretty quick, started seeing red and misread some responses, but ultimately it was left unresolved. I guess I was incensed to witness a group of straight friends debating the relevance of pride (which I then made all about ME…lol) but I still haven’t managed to articulate the importance of “pride” to me which I why I need to put this down in writing.

Gay Pride to me is self-esteem, stamping out shame, the fight, imparting knowledge to the new generation of queer folk. It isn’t the corporatised event that happens in central London every year, although the essence and heart of the movement can still be felt. Usually when I see Peter Tatchell marching I often get a bit star struck, and am reminded that this is a “march” not a parade. Last year the Pride Punx float (on which Restarts played) made me absolutely gush inside as it brought my two worlds harmoniously crashing together – thank you Tali!

I realise I am different and am proud of that difference and that “pride” is an essential ingredient for my survival. Will we one day rise above the need for gay pride? I hope so but somehow doubt it, unless we can eradicate the key proponent of homophobia from our species: religion and sexism. I think even if we did evolve past the need to march I would still feel pride in the struggle.

I would love to hear from other queer people on this, other than the echo chamber that is my own internal dialogue! x