For those of us blown away by these women at Wonkfest a couple of years ago, this gig has been a long time coming. The New Cross Inn is completely rammed and there is little need for that familiar invitation from feminist punk bands for the women to take over the mosh pit. They’re already there and this place looks like the average Incel’s Room 101. Wonk Unit have warmed the place up with their cartoon punk pantomime. Now it’s time for the serious business of demanding total equality, at several thousand decibels.

Opener ‘Retrograde’ is a pounding call to arms exuding the confidence that comes from redemption and newfound purpose. It is very much the fast and melodious punk rock that they have nurtured and developed since their first release. Smacking you in the chest with its simple, yet effective chords and a furious pace. ‘Why change a thing’ takes a welcome swipe at the apathy that comes with privilege and ‘I’m done’ is an early highlight of the set with its sardonic commentary on the patriarchy delivered with spine tingling vocal structures. 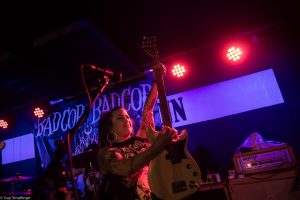 The 2017 album Warriors understandably dominates much of tonight’s show as it set a new benchmark for the band and the feminist punk scene as a whole. In the nineties, we all applauded the explosion ‘Riot Grrrl’ which provided the much-needed antidote to self obsessed men with guitars and zero self awareness. If Warriors had hit the record stores back then it would rightly hold it’s place in rock history alongside Nirvana’s Nevermind and this lot would have been selling out stadiums.

Not that they don’t have plenty of gems to bring us from the earlier back catalogue. In 2015 they dropped the Not Sorry LP. A thirteen track achievement, that proved beyond all doubt, that they were already onto great things. From that we get the bittersweet ‘Nightmare’ which is probably the closest they get to writing a love song, ‘Cheers’ which examines the morning after the night before in all its gritty glory and ‘Support’ which throws down the gauntlet of solidarity like nothing else.

Their main strength lies in the complete synchronicity of three sets of pristine vocals complimented by the absolute precision of the guitar work and beat-perfect rhythm section. They of course manage all of this while leaping around the stage like their lives depend on it. 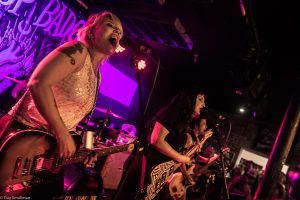 One of the few opportunities to catch our breath comes with ‘Amputations’ a song that puts the political to one side to examine the personal as Stacey recounts conquering the downward spiral that nearly destroyed her and the rest of the band a few years ago. Then we travel back to the beginning with ‘Rodeo’ from the first EP. A song that extends a welcome middle finger to those toxic relationships and their perpetrators.

Just as we’re beginning to wonder where they are going next on this journey, we get three new tracks, and we’re blown away. ‘Breastless’ is a deeply personal account of Stacey’s recent, and thankfully victorious, battle with cancer. She reminds all the girls (and boys) to regularly check themselves when introducing the song. Lei announces (and provides the main vocals) for ‘Pursuit of liberty’ a tune that rails against the appalling border policies of her country and it’s racist president. Then we round off the new stuff with ‘Perpetual motion’ a mature, slower and more melodious number with layered guitars and truly epic drums delivered by Myra. The band has been tight lipped about the new album, which is now at the mixing stage. But if this glimpse is anything to go by it will represent yet another leap forward. 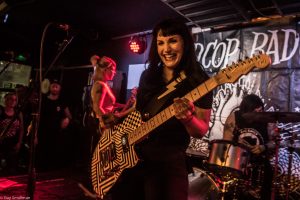 The remainder of the set swings between the deadly serious and unbearably tragic issues examined in ‘Victoria’ to the irresistible empowerment offered by the anthem that is ‘Womanarchist’. Finally before a couple of cheeky encores we get ‘Wild me’ that lulls the listener into an almost false sense of security as Jennie’s understated vocals build into a crescendo and explode into one of the most memorable and inspiring choruses imaginable.

This band seem pretty unstoppable right now and fast approaching yet another career peak. The new album is now more hotly anticipated than ever and the live shows that will accompany its release just cannot be missed.