Today the Extinction Rebellion environmental group staged their boldest action yet by blocking several London road transport hubs at Oxford Circus, Waterloo Bridge, Parliament square and Marble Arch. The action at Marble Arch was by far the biggest with over a thousand activists blocking every road around the monument and senting up a stage and camping area inside. They have announced their intention to stay there until they are evicted. 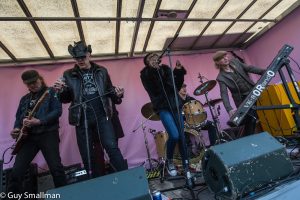 The stage hosted a number of speakers and musicians promoting awareness about climate breakdown. But perhaps the best known and most unlikely act to take the stage was country acid house rockers Alabama 3 from Brixton who brought their unique blend of techno-groovey dance to an extremely appreciative audience. The band played with a full line up except Jake (aka the Reverend D Wayne Love) and stormed through a set of greatest hits starting with a reworked ‘Mao tse tung said’. They are well used to playing outdoor gig being regulars on the festival circuit but this unlicensed event was very different. 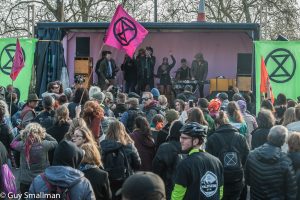 There are not many bands that would encourage their audience to leave half way through but that is exactly what frontman Rob (aka Larry Love) did when a call out for action came to light halfway through the set. Word had reached Marble Arch that a similar blockade at Waterloo bridge was about to be forcibly evicted by the cops so Rob asked everyone who had been present since the first song to head down there to reinforce the numbers. No one appeared to head his instructions with the crowd remaining in place until the end of their 40 minute set.

Tomorrow we will be joining forces with our fellow dissidents @ExtinctionR

We will be preaching the Acid House Country Gospel to the world as we shut down Central London. Join us at the Rebel Rebel Stage at Marble Arch tomorrow from 4pm.